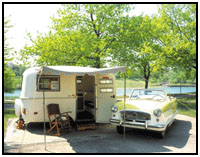 In the historic housing world, the term adaptive reuse is often employed to describe a building that is converted to another use, such as when an old fire station is converted to a residence. To take the process a step further, one might use the term adaptive recycling to describe one thing that becomes something else, such as old tires that are ground up and mixed with asphalt to create a resilient road surface. In the RV world, there is no better example of adaptive recycling than the compact Boler trailer.

The Boler trailer was the brainchild of Ray Olecko of Winnipeg, Canada. Olecko had gained a measure of fame as a developer of lightweight fiberglass septic tanks as an alternative to bulky and heavy concrete and steel ones. He was also an avid camper and outdoorsman. While camping with his wife and two children in the late 1960s, Olecko came up with the idea of employing the same molded fiberglass technology he used to manufacture septic tanks to build a compact trailer that was big enough to shoehorn in two adults and two children.

Dispensing with traditional methods of design that required complex calculations and blueprints, Olecko simply sketched out the shape on a piece of cardboard and handed the primitive drawing to his fiberglass mold maker, Sandor Dussa, with the simple command, “Make it like this.” Convinced it was a good idea, Dussa and Olecko mortgaged their homes to generate start up costs of $5,000 and set off to put their ideas into action.

Olecko didn’t have a name for the tiny trailer, but after studying Dussa’s creation, which bore a resemblance to a bowler hat, he decided to name it the Boler. Changing the spelling gave the trailer a unique name and also made it possible to obtain a trademark on the brand since it was a made-up name.

With the appropriate running gear and accessories, the tiny trailer measured a mere 13 feet in length and weighed less than 1,000 pounds. Olecko rolled the petite trailer in front of a number of dealers to generate orders but the dealers were reluctant to add it to their product line, since the Boler’s projected price of $1,400 was considerably more than the $900 cost of a comparably equipped aluminum trailer. Still, Olecko persisted even to the point of picking up the trailers by their hitch and dragging them around a parking lot to demonstrate their lightweight design.

His persistence paid off. Armed with a handful of orders, Olecko commenced to manufacture the trailers out of a 4,000-square-foot facility in 1968. The plant produced 100 units that first year. The first trailers had a relatively flat roof, which makes them easy to date and identify. Olecko opted for a more arched ceiling to increase headroom, starting with the 1969 model year.

In 1969 he moved the company to a larger 30,000-square-foot facility in Winnipeg. That year 150 units were produced and by 1970 there were between 400 and 500 Bolers manufactured. In 1971 Olecko sold Boler manufacturing franchises to two other Canadian companies in Earlton, Ontario, and Peace River, Alberta. The Winnipeg plant was churning out close to 900 Bolers a year. By late 1971, the company had sold a U.S. franchise to Eleanor International in Wichita, Kansas.

Like many inventors, Olecko yearned for new adventures and sold his share of the company to Jim Pattison, who owned Neonex manufacturing. Neonex manufactured a number of recreational vehicles as well as mobile homes. The Boler manufacturing facility was moved to a new plant in Calgary. Records are a bit sketchy but production of trailers with the Boler name ceased in 1980, after 7,000 to 10,000 units were produced.

Although a relatively small number of the trailers were built, thanks to their non-corroding fiberglass shell and small size, which allowed them to be stored in a protective shelter, there are still a number of them on the road. The little trailer also has a fan club that holds rallies. Rallies that are exclusively for Boler owners are called Boleramas. Rallies that allow all makes of fiberglass trailers are called Glass Class Rallies. For more information on Boler trailers and links to other fiberglass trailers go to www.geocities.com/bolerama/